I started my own silent key page in memory of all the local amateur radio operators I have known over the years who are deceased. Some are not listed because the information of their passing was not made public or the family wanted it to remain private.

If you are in the Portland, Beaverton, Hillsboro and surrounding areas, please submit your Local Silent Key operators call sign, name and date of passing via the Contact page with pictures, stories and facts and I will create a page here on this site on their behalf.

There will need to be a verification process before I can post anything. I need to verify the Silent Key information with ARRL or other means preferably from the family or public record. 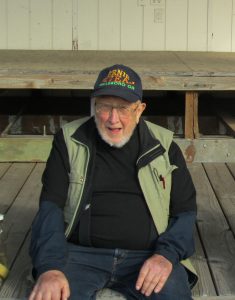 Ernest (“Ernie”) Avery Johnson, 89, a resident of the Helvetia community passed away October 19, 2019 at his home surrounded by his family.

Ernie was born April 24, 1930 in Petersham, Massachusetts, the youngest of two children born to Franklin and Margaret (Hyde) Johnson. He grew up in Petersham and graduated from Petersham High School with the class of 1948. Ernie attended the University of Massachusetts (UMass), Amherst, to gain a bachelor’s degree in Agricultural Engineering in 1953. At UMass, Ernie met his future wife – Claire Magee. Ernie and Claire were married October 10, 1953 at Ernie’s family farm in Petersham.

Ernie then attended Purdue University in Indiana. At Purdue, Ernie was teaching and studying for his Master’s degree. He completed his Master’s degree in 1959 and moved back to Massachusetts, eventually settling in Conway, MA in 1966. Ernie was a university educator for the University of Massachusetts at Amherst, teaching and advising graduate students, and was Associate Professor of Agricultural Engineering upon his retirement from UMass about 1990. He worked as a researcher for Natick Army Labs and taught summer schools at Stockbridge School of Agriculture.

Ernie was private pilot and enjoyed traveling, on the road and in the air, with his wife. They visited many places throughout the continental United States and up into Canada and Alaska. Ernie enjoyed farming and raising beef cattle. He also enjoyed reading, listening to classical music, woodworking and working on tractors and cars.

Ernie and Claire had 3 children: Elizabeth, Franklin and Dana. He and his wife, Claire, moved to the Helvetia area in 1992 to be near their two daughters, Elizabeth and Dana. His biggest passion after moving to Oregon was ham radio, and he became an Extra Class License holder. Ernie was very active in both the Amateur Radio Emergency Service (ARES) and the amateur radio National Traffic System. Ernie was an assistant emergency coordinator for Washington County ARES for many years. He was a mentor to all and had many ham friends in Oregon.

Ernie was preceded in death by his son Franklin, his sister Harriett Warrington and his parents. He is survived by his loving wife Claire, daughter Elizabeth (“Liz”) and son-in-law Paul Thutt, daughter Dana, and his grandson Neil Thutt.

I met Ernie, Claire and his daughter Dana when I first moved to Oregon in 1996, we were neighbors at the time. We were friends for 23 years.

Ernie and Claire were the first hams who I became friends with and their kindness and hospitality will always be remembered and appreciated.

Ernie invited me to their home and shared their love of Amateur radio and the NTS with me. Ernie was the first ham who introduced me to traffic handling and he showed me what a radio gram was and how to send a piece of traffic. He guided to to the NTTN Net and I then learned further from NTTN traffic handlers. Ernie is greatly missed, rest in peace Ernie, K7EAJ, from KC7NYR.

Al, 88 years old, a lifelong resident of Portland, passed away after a short illness June 7, 2018. For complete details, visit Oregon Live. A page will be added on this site in honor to Al.

I had the pleasure to know Al for a short 18 years. He was a great person and dedicated Amateur Radio Operator. I met Al in 2000 at a NTTN pizza gathering. At that time Dave, N7YSS was the Net Manager for the Northwest Traffic & Training Net. I was the Assistant Net Manager at that time. Al took a picture of us that day. It was Al, Dave and myself, Mark – KC7NYR. Our last QSO was 7 days before his passing on a 147.040. We had a warm and meaningful conversation. Rest in peace my friend, 73!

Bob was born in Sault St Marie, MI to James and Lillian Oswald, the oldest of four children. Prior to the start of school, the family moved to Houghton, Michigan, a former mining town in the picturesque upper peninsula on Lake Superior known for abundant snowfall.

Bob’s father was a professor at Michigan Tech University. During the summers he was a seasonal park ranger at Isle Royale National Park in Lake Superior. Every year the family would move to the island for the summer and Bob and his siblings would spend their days exploring by foot and by boat the island. He often spoke about his idyllic childhood on Isle Royale. He would later spend a summer volunteering at Isle Royale.

After graduation from Houghton High School he went to college at Michigan Tech, following in his father’s footstep studying electrical engineering. Upon graduation he went off “to be a cowboy” and moved to Scottsdale, Arizona and Motorola, where he worked in government electronics. It was at Motorola that he met Nancy Kittock, and the two were married in 1970. He continued his education and earned his Master’s Degree from Arizona State University. While living in Arizona he earned his private pilot’s license as well as a seaplane rating. He was also an avid and competitive sailor, navigating his sailboat on the Arizona lakes.

A curiosity and desire to explore the Pacific Northwest prompted a move to Oregon in 1974 where he joined Tektronix in their instrumentation division. He became a Registered Professional Engineer, passing the exam with high honors. They bought a small piece of acreage in Hillsboro so Nancy could have her horses, and Bob continued logging many miles from Hillsboro airport with the Tek Flying Club.

Bob was said to be “A Renaissance Man” and he had an unquenchable curiosity for just about everything. There were only two things that he wasn’t particularly interested in: politics and following sports. He started a silk screen printing business that he did evenings and weekends. It earned enough money to buy the current acreage in Gaston. After selling that, he started Pacific Northwest Wine Club.

In 1991 they moved to Timber Creek Ranch in Gaston. Bob loved his hilltop property with its expansive view and the forest trails. He built a small shelter in the woods and called it Robin’s Roost. Bob loved cats and had a handful of special ones, especially Wally.

He enjoyed what he called his “Grand Adventures”, each one taking planning and effort to execute. A favorite were the two summers on The Adventuress, a historic tall ship that teaches environmental sustainability sailing in Puget Sound. His cross country motorcycle trips were also Grand Adventures, where he traveled to Michigan to the class reunion he organized. And another motorcycle trip through the Southwest with his brother, Dick. He so loved teaching and sharing his knowledge that he volunteered in the Gaston High School woodshop and was a woodworking instructor for Portland Community College.

He loved music and played several instruments, starting with an organ that he built from a kit. He went on to study piano, saxophone and clarinet. A community auction brought home a violin and inspired him to build a violin, one of his proudest accomplishments.

Bob loved everything wood ~ from the forest on the property to the furniture and wood shavings he created in his shop. He became a master woodcrafter and built many beautiful pieces of furniture and detailed models. He joined the Guild of Oregon Woodworkers and became involved as an instructor, webmaster and newsletter editor. He was proud of his legacy with the Guild.

He always wanted to drive something big, and a woodworking friend gave him opportunity to learn to drive a dump truck and work on their jobs. That followed with a short stint driving a school bus.

Survivors include his wife, Nancy Oswald, of the family home in Gaston, Oregon; his sister, Barbara Wenberg, of Joliet, Illinois; his brother, Richard “Dick” Oswald, of San Antonio, Texas; his sister-in-law and husband, Kathleen and Bob Roylance, of Swansea, Illinois and his brother-in-law and wife, John and Jean Kittock, of Truckee, California.

This Site is Updated Often. Thank you for The Visit!
Copyright © 2018-2021 KC7NYR Amateur Radio Site